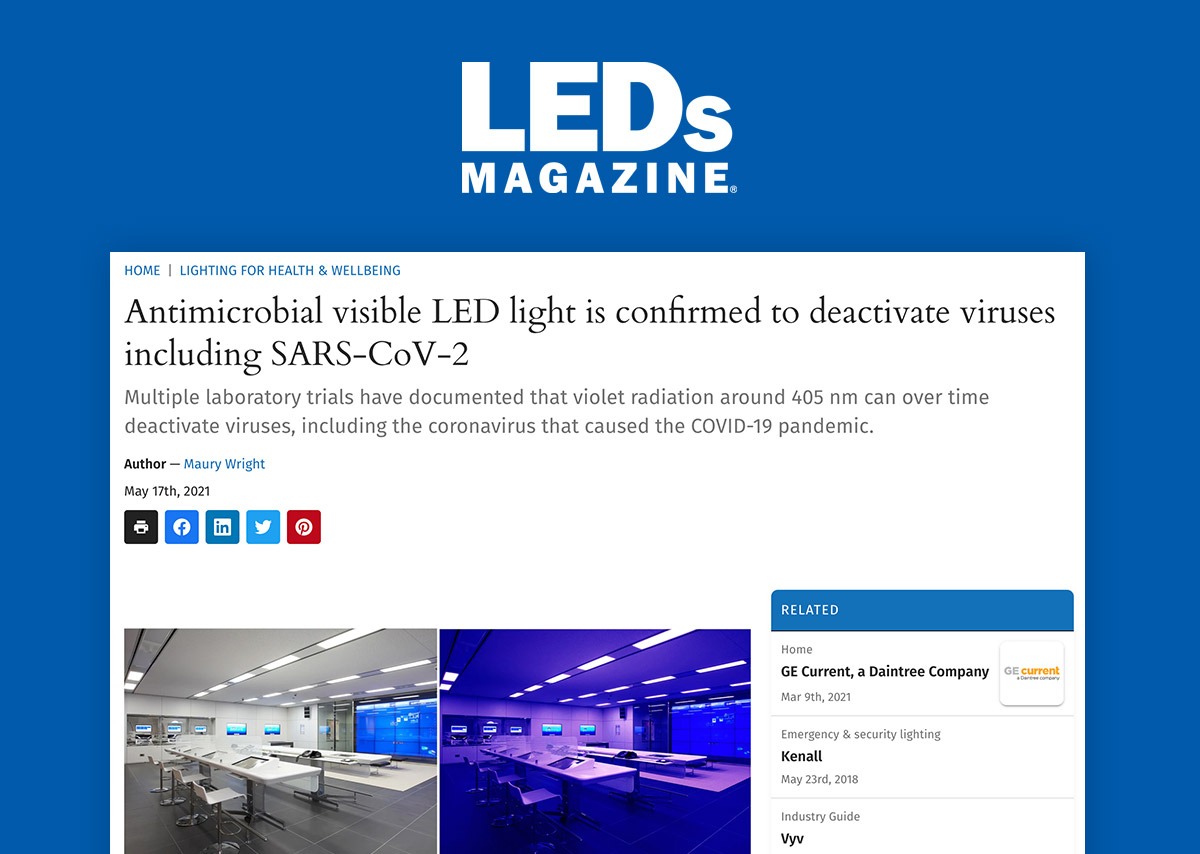 An independent research from the Icahn School of Medicine at Mount Sinai has confirmed the efficacy of the frequencies of the Biovitae spectrum to kill the SARS-CoV-2 and other viruses. This is an important recognition for the Celio Military Polyclinic in Rome which was the first in the world to make this research and to publish the results on June 2020 on MedrXiv, and the final confirmation of the uniqueness of Biovitae, setting up its primacy among the other sanitizing lights in the market.

Multiple laboratory trials have documented that violet radiation around 405 nm can over time deactivate viruses, including the coronavirus that caused the COVID-19 pandemic.

Three separate manufacturers of germicidal visible-light products based on violet LEDs have declared that the antimicrobial technology has been confirmed to deactivate the SARS-CoV-2 virus that causes COVID-19. Kenall, Molex, and Vyv have cited research sources regarding the germicidal efficacy of their products including the Icahn School of Medicine at Mount Sinai, Microchem, the Celio Military Polyclinic in Rome, and other military laboratories in Germany and Sweden. Such solid-state lighting (SSL) technology is safe for use in the presence of people but does not provide the immediate deactivation of viruses than can be achieved with ultraviolet (UV) radiation in the UV-C band (100–280 nm).

Over a number of years we have covered such violet visible-light disinfection technology and similar technology that operates in the UV-A band and is safe for humans at prescribed levels. We had referred to the technology as continuous disinfection because the germicidal 405-nm radiation must be powered on continuously and can kill or deactivate a variety of pathogens over relatively long periods of hours or a day. That continuous disinfection moniker is now ambiguous because at least one low-power UV-C product on the market from GE Current is intended for continuous operation.

The visible-light products were already proven to kill or deactivate bacterial and fungicidal pathogens. For instance, such products have been installed in settings ranging from sports locker rooms to medical facilities to fight pathogens such as those that cause MRSA (Methicillin-resistant Staphylococcus aureus) and other staph infections and C. diff (Clostridium difficile) infections. Advocates of the germicidal technology suspected it would also deactivate viruses such as SARS-CoV-2, and now there are multiple studies that indicate such capability.

“Indigo-Clean disinfection is in high demand and more critical than ever before. Confirming its ability to kill SARS-CoV-2 during this pandemic is a game changer: It opens new possibilities from small congregate settings to locations that must, by necessity, host large groups of people,” said Yahnke. “Now, instead of using more expensive, hazardous, and complicated technologies to kill viruses and bacteria, facility managers can simply install disinfection lighting and know that it is automatic and — more importantly — completely safe.”

Kenall offers the disinfection technology in products that operate in one of three ways. The Indigo-Clean EX Series and the Dual-Mode Indigo-Clean Series integrate both white-light and violet-light LED channels, along with control systems. When people are present in a space, both channels are activated so that the people in the space can see well — Kenall calls such operation blended mode. When the space is vacant, only the violet channel is activated to save energy. Kenall said the EX Series was shown to deactivate 99% of SARS-CoV-2 over 24 hours of usage and is intended for critical care areas in a medical facility. The similar Dual-Mode products used lower-power white LEDs and was shown to deactivate 94% of SARS-CoV-2 based on 12 hours of blended-mode operation and 12 hours of 405-nm radiation. The company also offers a Single-Mode Series that has no control system and always produces a mix of white and 405-nm light. The company has said that it can’t define a germicidal efficacy value because of the absence of a control system. The Dual-Mode Series addresses energy regulatory policy with Kenall expecting a broad range of uses. Yahnke said, “The new dual-mode option also helps address possible concerns about energy codes. Because this is such a powerful technological tool, we believe this will help people in a variety of businesses and professions very quickly get back to normal activities.”

Vyv, meanwhile, also cited the Mount Sinai research in its press release. The company said it also commissioned independent tests at an accredited lamp called Microchem Laboratory in Texas. Moreover, Vyv claims much quicker deactivation than has generally been discussed relative to visible-light disinfection. The announcement said its technology could deactivate a non-enveloped virus at a 99.98% rate in just six hours.

“The implications of this are vast because unlike harmful UV-C light, Vyv’s patented technology can be used continuously and without restriction 24/7 around people, animals and plants. The recent findings of enhanced efficacy against viruses greatly expands the antimicrobial impact delivered to spaces currently protected with Vyv technology, as well as in new spaces,” said Vyv CEO and co-founder Colleen Costello. “With our overhead LED products, Vyv is already lighting offices, schools and school buses, athletic centers, factories, and hospitals. We’re also embedding the same technology in many challenging spaces, including behind elevator buttons, inside consumer products such as humidifiers and bathroom fans, and in airplanes, trains, and public buses.”

The announcement from Molex is a bit more complex. Molex is not a lighting manufacturer but does offer smart building technology called CoreSync that can control SSL and other building systems. The Molex control system is based on the SmartCore technology platform from amBX. And Molex partnered with Nextsense to use that company’s Biovitae visible-light disinfection technology.

The Biovitae technology does add a twist to the violet-range radiation used to fight pathogens. Netsense has posted a spectral power distribution (SPD) graphthat shows two separate emission peaks, with a larger radiance in the 405-nm range and a smaller peak that appears to be in the blue region at just over 450 nm. Molex referred to the feature as a multi-frequency peak. We would assume that the underlying technology uses a dual violet- and blue-pump design with two emitters.

Molex said tests carried out at the Celio Military Polyclinic in Rome document 99.8% deactivation of SARS-CoV-2. The company did not specify a period of time for that claim to be effective. The announcement also noted that the technology provides excellent white light. Indeed, the SPD would seem to have the red energy needed for warm CCTs and good color rendering.

Pradeep Kakkattil - UNAIDS Executive Office, Director of the Office of Innovation and co-founder of…